If replacing a spoke, simply unscrew the damaged spoke from the hub using Park Tool SW-3 or Birzman Gold spoke wrench as a helper to break the thread lock.

On new spoke, apply low strength threadlock to both spoke end threads. We advise using a low strength threadlock good for vibration environments, such as Vibra-tite VC3, on both the hub and rim side of the spoke to prevent de-tensioning.  See our product page for purchase of proper threadlock. Thread on the Gulo G1 hidden nipple approximately 5 turns.  Insert new spoke through rim hole in line with spoke hole at the hub.  Thread new spoke completely into the hole in the hub shell.  Do not force threads to start, as this may damage the spoke and/or hub.  Back spoke out approximately 1/8-turn until there is a small amount of free play between spoke and hub.  At this point you are ready to start tensioning the new spoke.

Using the Park Tool SW-3 blue spoke wrench as a spoke holder, hold the spoke from the ferrule up at the rim.  EXTREMELY IMPORTANT: DO NOT HOLD THE SPOKE FROM THE FERRULE AT THE HUB SIDE OR ALLOW THE SPOKE TO TWIST IN ANY WAY WHILE TENSIONING! Any torsional force (spoke windup) about the central axis of the spoke will cause damage and premature failure of the spoke.  If you have built wheels with bladed spokes and a bladed spoke holder, it is the same process.

Using Park Tool SW-15 or SW-17, begin turning the hidden nipple while holding the spoke in place with Park Tool SW-3 or Birzman Gold spoke wrench to prevent the spoke from turning.

Continue to tension the spoke in this manner until the wheel is brought back to true. If you have a tensiometer, tensions should be around 120kgf (front non-drive, rear drive-side). We use the iGaging tensiometer sold by WheelFanatyk. See our tension calibration chart for the appropriate tensioning information. 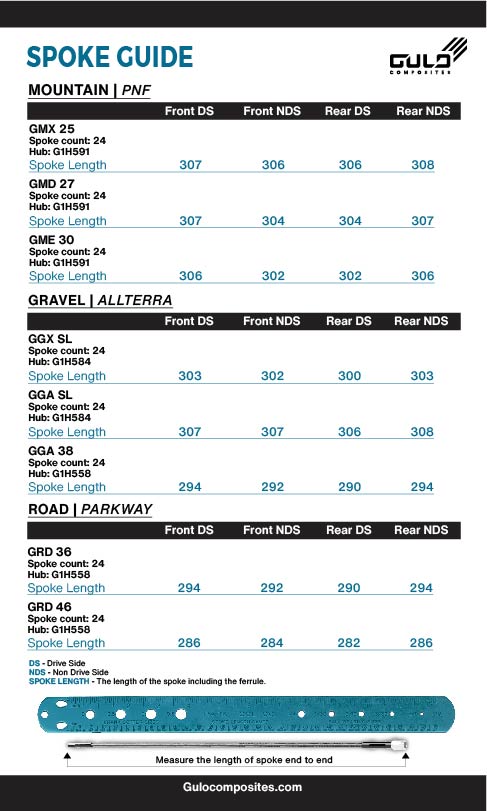 Welcome to the benefits of the Gulo Integrated System and our system engineered approach to designing and building the best riding wheels ever. Patents Pending.

You can find out more about which cookies we are using or switch them off in settings.

Shopping cart
There are no products in the cart!
Continue shopping
0

This website uses cookies so that we can provide you with the best user experience possible. Cookie information is stored in your browser and performs functions such as recognising you when you return to our website and helping our team to understand which sections of the website you find most interesting and useful.

Strictly Necessary Cookie should be enabled at all times so that we can save your preferences for cookie settings.

If you disable this cookie, we will not be able to save your preferences. This means that every time you visit this website you will need to enable or disable cookies again.